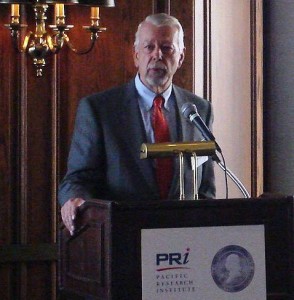 Sometimes human and social concerns with an intellectual dimension get mistaken for debate “in the Ivory Tower.”  This is an understandable mistake.  No harm done.  Still though, it is important whenever possible to set the course more clearly, and tie values in knowledge issues to pressing contemporary concerns in plain language.

Author and writer Nancy Pearcey has a short and poignant piece in the American Thinker investigating Vaughn Walker’s decision to overturn California’s Proposition 8, explaining how the fact and value split contributed so centrally to the judge’s ruling.

What this means is that Walker has enshrined into federal law a secular view of truth that drives a wedge between facts and values. Of course, everyone recognizes that there is a difference between factual statements (what is) and moral statements (what ought to be). But historically, it was understood that both kinds of statement make claims about what is true. If you stated what a person ought to do, you might be right or wrong, but you were thought to be making a reality-oriented, truth-based claim.

Regardless of one’s personal opinions on the volatile and highly charged issues implicit and surrounding Proposition 8, and the use of the judiciary to overturn “the will of the voting public,” what is important to note here simply is how relevant is the mission of VKF.  The success or failure of this project has and will continue to have constant and enormous implications for our lives personally and as a society.

Pearcey carefully walks the reader through the process to the point at which Walker can present as facts (guiding his ruling) the following:

Take a hard look at some of the sweeping “facts” that, according to Walker, are now firmly established by evidence:

The conversation is best understood after reading the whole brief and clear article here.

The mission of VKF reaches into all parts of life, personal, in the family, and on the social level.  Scholars and institutions are devoted to addressing the impact of thought and its foundations.  But the urgent mission of VKF is not limited to the concerns of scholarly and intellectual institutions, it exists for all people since every one of us are affected by patterns and directions embedded non-reflectively in the unexamined assumptions of the information age.