The post enlightenment era fractured the sacred monolith in the Western worldview and social development.  There emerged what some hold to be  “purely secular” sectors of enterprise.  Void of sacred roots, from where will these sectors gain their ethical and moral guidelines?  This is the question we face. What are the points of interface for the sacred and the secular once the assumption of shared space is broken.

In this New York Times article, Nuns who won’t stop nudging we read of a true modern effort to guide corporate behavior by people who live under spiritual vows.  The relationships seen here between profit seekers and champions of spiritual life, and social justice provides an encouraging model not just for economic behavior but for other secular enterprise as well. 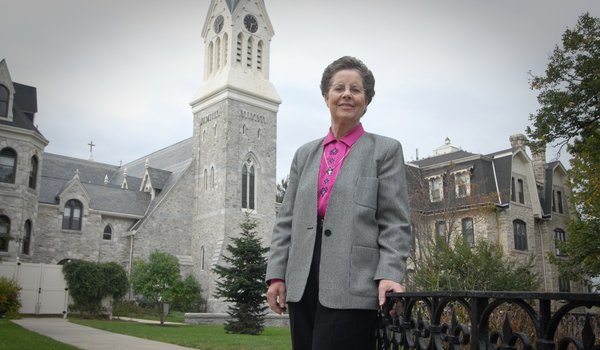 “We're not here to put corporations down,” says Sister Nora Nash of the Sisters of St. Francis. “We're here to improve their sense of responsibility.”

Long before Occupy Wall Street, the Sisters of St. Francis were quietly staging an occupation of their own. In recent years, this Roman Catholic order of 540 or so nuns has become one of the most surprising groups of corporate activists around.

The nuns have gone toe-to-toe with Kroger, the grocery store chain, over farm worker rights; with McDonald’s, over childhood obesity; and with Wells Fargo, over lending practices. They have tried, with mixed success, to exert some moral suasion over Fortune 500 executives, a group not always known for its piety.

NOT long ago, an unusual visitor arrived at the sleek headquarters of Goldman Sachs in Lower Manhattan.

It wasn’t some C.E.O., or a pol from Athens or Washington, or even a sign-waving occupier from Zuccotti Park.

It was Sister Nora Nash of the Sisters of St. Francis of Philadelphia. And the slight, soft-spoken nun had a few not-so-humble suggestions for the world’s most powerful investment bank.

Way up on the 41st floor, in a conference room overlooking the World Trade Center site, Sister Nora and her team from the Interfaith Center on Corporate Responsibility laid out their advice for three Goldman executives. The Wall Street bank, they said, should protect consumers, rein in executive pay, increase its transparency and remember the poor.

In short, Goldman should do God’s work— something that its chairman and chief executive, Lloyd C. Blankfein, once remarked that he did. (The joke bombed.)

Long before Occupy Wall Street, the Sisters of St. Francis were quietly staging an occupation of their own. In recent years, this Roman Catholic order of 540 or so nuns has become one of the most surprising groups of corporate activists around.

The nuns have gone toe-to-toe with Kroger, the grocery store chain, over farm worker rights; with McDonald’s, over childhood obesity; and with Wells Fargo, over lending practices. They have tried, with mixed success, to exert some moral suasion over Fortune 500 executives, a group not always known for its piety.

”We want social returns, as well as financial ones,” Sister Nora said, strolling through the garden behind Our Lady of Angels, the convent here where she has worked for more than half a century. She paused in front of a statue of Our Lady of Lourdes. “When you look at the major financial institutions, you have to realize there is greed involved.”

The Sisters of St. Francis are an unusual example of the shareholder activism that has ripped through corporate America since the 1980s. Public pension funds led the way, flexing their financial muscles on issues from investment returns to workplace violence. Then, mutual fund managers charged in, followed by rabble-rousing hedge fund managers who tried to shame companies into replacing their C.E.O.’s, shaking up their boards — anything to bolster the value of their investments.

The nuns have something else in mind: using the investments in their retirement fund to become Wall Street’s moral minority.

A  PROFESSORIAL woman with a sculpted puff of gray hair, Sister Nora grew up in Limerick County, Ireland. She dreamed of becoming a missionary in Africa, but in 1959, she arrived in Pennsylvania to join the Sisters of St. Francis, an order founded in 1855 by Mother Francis Bachmann, a Bavarian immigrant with a passion for social justice. Sister Nora took her Franciscan vows of chastity, poverty and obedience two years later, in 1961, and has stayed put ever since.

In 1980, Sister Nora and her community formed a corporate responsibility committee to combat what they saw as troubling developments at the businesses in which they invested their retirement fund. A year later, in coordination with groups like the Philadelphia Area Coalition for Responsible Investment, they mounted their offensive. They boycotted Big Oil, took aim at Nestlé over labor policies, and urged Big Tobacco to change its ways.

Eventually, they developed a strategy combining moral philosophy and public shaming. Once they took aim at a company, they bought the minimum number of shares that would allow them to submit resolutions at that company’s annual shareholder meeting. (Securities laws require shareholders to own at least $2,000 of stock before submitting resolutions.) That gave them a nuclear option, in the event the company’s executives refused to meet with them.

Unsurprisingly, most companies decided they would rather let the nuns in the door than confront religious dissenters in public.

“You’re not going to get any sympathy for cutting off a nun at your annual meeting,” says Robert McCormick, chief policy officer of Glass, Lewis & Company, a firm that specializes in shareholder proxy votes. With their moral authority, he said, the Sisters of St. Francis “can really bring attention to issues.”

Sister Nora and her cohort have gained access to some of the most illustrious boardrooms in America. Robert J. Stevens, the chief executive of Lockheed Martin, has lent her an ear, as has Carl-Henric Svanberg, the chairman of BP. Jack Welch, the former chief executive of General Electric, was so impressed by their campaign against G.E.’s involvement in nuclear weapons development that he took a helicopter to their convent to meet with the nuns. He landed the helicopter in a field across the street.

The Sisters of St. Francis are hardly the only religious voices challenging big business. They have teamed up on shareholder resolutions with other orders, including the Sisters of Charity of St. Elizabeth and the Sisters of St. Dominic of Caldwell, both in New Jersey. The Interfaith Center on Corporate Responsibility, the umbrella group under which much of Sister Nora’s activism takes place, includes Jews, Quakers, Presbyterians and nearly 300 faith-based investing groups. The Vatican, too, has weighed in with a recent encyclical, condemning “the idolatry of the market” and calling for the establishment of a central authority that could stave off future financial crises.

“Companies have learned over time that the issues we’re bringing are not frivolous,” said the Rev. Seamus P. Finn, 61, a Washington-based priest with the Missionary Oblates of Mary Immaculate and a board member of the Interfaith Center. “At the end of every transaction, there are people that are either positively or negatively impacted, and we try to explain that to them.”

On a recent Saturday morning, 12 members of the Sisters of St. Francis shareholder advocacy committee gathered in Our Lady of Angels, a cavernous, hushed building housing 80 nuns that if not for the eerie quiet would resemble an Ivy League dorm. As three nuns talked in the foyer, their tales of nieces and nephews echoing through the halls, the advocacy group, which includes several lay people, gathered in the Assisi Room for its quarterly meeting.

After a prayer, a group recitation from Psalm 68 (“The protector of orphans and the defender of widows is God in God’s holy dwelling”) and a round of applause for a nun celebrating her 50th anniversary, or golden jubilee, as a member of the order, they settled down to business.

Sister Nora, in a gray-checked jacket and a pink blouse overlaid with a necklace bearing the Franciscan cross known as a Tau, began by updating the group on its finances. In addition to its shareholder advocacy program, the committee has a social justice fund from which it allocates low-interest loans, in amounts up to $60,000, to organizations that fit with its mission. This quarter, it lent money to the Disability Opportunity Fund, a nonprofit that helps the disabled; and the Lakota Funds, a group trying to finance a credit union on a Native American reservation in South Dakota.

LATER, over lunch in the cafeteria downstairs, the Sisters of St. Francis discussed the delicate dance they face in their shareholder advocacy program — pushing corporations to change their actions, while not needling them so much on sensitive issues like executive pay that bigwigs like Mr. Blankfein, at Goldman Sachs, are not willing to meet with them.

“We’re not here to put corporations down,” Sister Nora said, between bites of broccoli salad. “We’re here to improve their sense of responsibility.”

“People who have done well have a right to their earnings,” added Sister Marijane Hresko, when the topic of executive compensation comes up. “What we’re talking about here is excess, and how much money is enough for any human being.”

Sister Nora nodded. “I can’t exclude people like Lloyd Blankfein from my prayers, because he’s just as much human as I am,” she said. “But we like to move them along the spectrum.”

Goldman tries to maintain a polite relationship. “We have found our conversations with Sister Nora Nash and other I.C.C.R. members to be very insightful and instructive,” a spokesman said.

But change has not been speedy. Despite some successes — such as a campaign directed at Wal-Mart that the nuns say led the company to stop selling adult video games — the insider-heavy nature of corporate share structures means that the Sisters of St. Francis rarely succeed in real-world terms, even when their ideas prove popular. Most of their submissions receive less than 20 percent of the shareholder vote, and many get stuck in single digits.

“I honestly don’t know if it’s been effective or not, but they do highlight issues other shareholders don’t,” Mr. McCormick of Glass, Lewis says.

Still, Sister Nora, who would give her age only as “late 60s,” said she would keep pushing companies to do the right thing. Lately, she has been particularly interested in hydraulic fracturing, or fracking, the natural gas collection technique that has been the subject of controversy over its environmental and chemical impact. She has been attending rallies for the antifracking cause, and has submitted resolutions to oil corporations including Chevron and Exxon, encouraging them to put firmer controls in place.

Soon, Sister Nora will go on retreat, an annual Franciscan rite in which nuns retire to solitude for a week of contemplation and prayer. There, she will gather her strength, rebuild her fighting spirit and emerge ready for the next round of resolutions and closed-door meetings.

She has even identified her next target: Family Dollar, one of the many deep-discount chains that sell cheap imported goods to Americans who generally do not know, or necessarily care, where those products come from. Sister Nora wants to make sure Family Dollar’s suppliers have fair labor policies, and she is concerned about whether its products are free of toxins.

“They just got a new president,” Sister Nora says. “I have a letter ready to go Monday.”