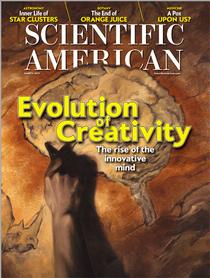 Modern science has led to great advances in modern civilization, enabling people to live longer and more conveniently. However, many enamored by modern science, who do not practice the rigorous controlled experimentation or apply the mathematics that is its foundation, view it more as an ideological faith and attempt to use it to replace religion. There was a lot of resistance to science by traditional religions that were unable to transcend inherited dogma. This contributed to a non-rational conflict between science and religion that led many people to reject religion in the name of science. Those who do so can be said to profess a faith in “scientism.”

Today, scientism often expresses itself in the shallow slogans of popular culture and the politics of interest groups, rather than the genuine promotion of scientific knowledge through the use of scientific methods. And, many research grants and political policies follow this scientism, rather than genuine science because the scientific-sounding rhetoric convinces those making the policies or giving out grants. This often wastes millions of taxpayer dollars, and is no less fraudulent than selling a taxpayer a fraudulent promise of salvation.

I was recently asked to read an editorial posted in the blog section of Scientific American that illustrates this scientistic approach to the world. The essay “Do All Cults, Like All Psychotherapies, Exploit the Placebo Effect?” by John Horgan is largely a diatribe against all “cults,” religions, and psychotherapies that attempt to define them with traits like rituals, supernaturalism, secrecy, uniqueness, and money as characteristics of cults, and arguing that all religions are illusory and therefore only valuable in providing fake meanings and values to individuals.

The author never documents any scientific experiments to prove his thesis. Rather he lists off the sort of unscientific accusations that have been made by former adherents of groups who have felt misled, or by scientists and philosophers who have criticized the irrationality or falsity of specific religious doctrines–like the earth was created 6,000 years ago. Yet, this unscientific article was published on the website of a journal that claims to promote science, making one feel the journal’s editors are as much about ideology as science.

Religion, psychotherapy, secular ideologies, music, art, and other aspects of society that relate to non-rational aspects of human life may exist for reasons other than providing fraudulent illusions. The left side of the human brain is considered to be rational and the right side of the human brain non-rational—synthetic—providing instinctual, habitual, holistic, and emotional responses to the world. We are born with some instincts developed, and much of our socialization involves placing limits on these instinctual impulses so that we can learn to respect one another and live harmoniously in social groups. Religion and science both have a role to play in the development of knowledge that can transcend these biological impulses and give us tools to better our lives and improve society.

Let’s look at the Ten Commandments, supposedly religious knowledge. They tell us not to steal, kill, or commit adultery. Obeying these commandments has proven valuable to social peace and sustainability. But these commandments have not been “proved” by modern science; they were bequeathed to us by what rationalists would call superstitious religions and works of ancient literature. For that reason, some rationalists would tell us that these moral commands can be dismissed. But that is an act of “scientism,” and not an act of science.

F.A. Hayek and other philosophers and social historians have argued that the evolution of non-rational human culture is a form of adaptation. Our inherited values serve the survival of our culture. Some values make one culture more successful than another, and they tend to get adopted by the more successful societies as they evolve. Those ancient Ten Commandments were not just an arbitrary decree by Moses in an ancient work of literature; they were written down and revered because they had worked elsewhere in the Babylonian Empire. There is much similarity between the “religious” laws of the Old Testament and the “political” laws expressed in the Hammurabi Code.

In the ancient world, it was likely that prohibitions against eating pork served to prevent death by trichinosis, even though those Semitic groups knew little about the modern scientific approach to disease. Today, modern science has modified this prohibition by explaining in more detail when pork is safe to eat and when it is not. This modern knowledge can be said to transcend the “religious” knowledge about pork, but if the ancient laws on pork were discarded, and no limits were put on the instinctual impulse to eat pork when hungry, many people would die from trichinosis.

Philosopher Karl Popper has argued that it is unscientific for a scientist to argue a thing is not true simply because a modern scientist has not proved it. Rather, modern science can really only dismiss inherited cultural knowledge when a claim has been “falsified.” An example of falsification would be how the scientific explanation of the laws of gravity developed by Sir Isaac Newton proved that the earth was not the center of the universe. In this case, the religious doctrine that the earth was the center of the universe was genuinely “falsified.”

But gravity is a physical law, not a moral law that relates to human behavior and the curbing of baser human instincts. Scientific knowledge about values is the domain of the social sciences, the interpretation of human history, and traditional philosophy. Modern Darwinists tend to promote only the evolution of instinctual behavior at the expense of the evolution of cultural values aimed at placing restrictions on biological impulses—which traditional laws like the Ten Commandments represent. If science is not going to be dismissive of cultural evolution, it will need to employ genuine scientific methods to the study of the value of traditional rules like the Ten Commandments. Rather than saying we cannot believe “thou shall not kill” is a truth because science hasn’t proven the concept, a scientist would design a series of studies of societies comparing those in which murder is prohibited and those in which it is accepted.

Even a more religious sounding commandment, like “thou shalt have no other gods before me,” can be understood in a modern context to mean that we should not allow any human king, ideology, group, or thing be made into a false ultimate, or god. Doing this allows those who profess allegiance to the false god—like a political party–to demand everyone serve its interests. The violation of the first commandment can lead both to the destruction of freedom and the intolerance of pluralism. It can lead to serfdom and unhappiness, where people pursue the ends of the false god rather than their own happiness. It is not just religious people who have attempted to impose their view of the world on others as true. Converts to Darwinism, Marxism, and other secular ideas often parade them as the word of god.

To dismiss laws because they are “religious,” or were written by unscientific peoples or promoted by “dead white men” is unscientific justification for doing so. Such dismissals may be an act of a narrow-minded scientistic ideology, or they might be a rationalization to justify immoral behavior, or to assert one’s authority through rhetoric rather than on legitimate scientific grounds.

Real science is about discovery, human development, and principles that apply to everyone. Its goal should be to shed greater light than what previous generations have bequeathed us. Science does not dismiss all non-rational instincts and products of the right brain and assert that the rationality of the left brain is the only valid guide for human life. Rationality is only a part of what it means to be fully human. Too often modern scientistic rationalists have reacted dismissively towards religion in an unscientific manner; they throw out the baby with the bathwater.  A good example was the French Revolution and the “Cult of Reason” that led to perpetual cycles of violence and inadequate explanations of human behavior.

The development of human knowledge involves both rational and non-rational components that can exist in cooperation with one another, like the right and left halves of the human brain can each serve a purpose and act as a check and balance on individual behavior. Unification of non-rational and rational knowledge is a mature approach to knowledge, rather than the immature dismissive of reactionary posture of both traditionalists and rationalists who reject the value of either science or religion and cause wars between them. Both types of knowledge are important for a viable human society. If it is really promoting scientific knowledge, and not scientism, Scientific American magazine should be more careful in setting standards for contributions on their blog pages.